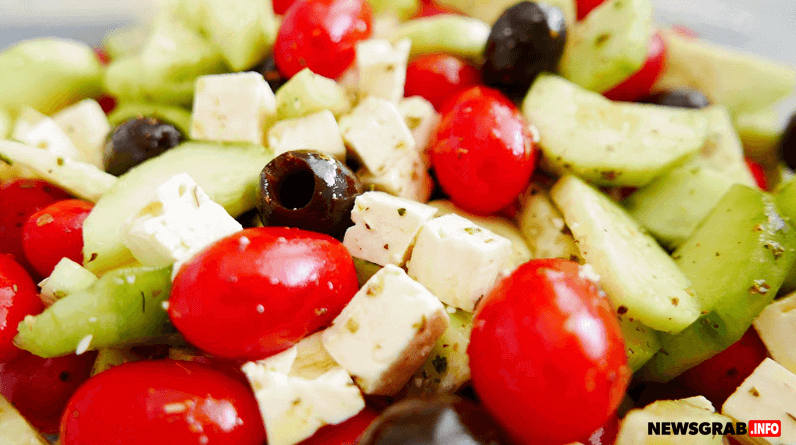 This article will expose everything you’ve always wanted to know about feta cheese and your health.

What is feta cheese?

Real feta, comes from Greece. It is traditionally made there from sheep’s or goat’s milk. Variants made from cow’s milk are also available, but they are certainly not considered the ‘real’ feta! Feta, after the milk has curdled, is placed in a salt bath made of water or whey.

There it remains for about two months, allowing it to mature properly. Then the cheese is taken out of the salt solution, after which it quickly dries. The resulting product is then sliced, and this is how you get the familiar product from the supermarket. Feta can have a spicy or a mild flavor, mainly depending on the ingredients used.

Within the European Union, feta is now a protected product name. This means that only feta made from goat’s or sheep’s cheese from Greece can officially carry this name. However, not all feta you find in stores actually comes from Greece. For example, Apetina is also a well-known producer of cheese – and it is based in Denmark.

In that case, the products are simply sold under a different name. White cheese’ is the most common alternative for feta cheese from countries other than Greece. Mediterranean cheese cubes’ is also sometimes used. In the end, it does not make much difference to the product itself what it is called. Only in the case of allergies can it be relevant: White cheese’ can also contain cow’s milk.

OK, but what exactly about the health benefits of feta – and white cheese? For starters, let’s take a look at the micronutrients it contains. For starters, of course, there are the necessary minerals. The most important, of course, is calcium. Sheep and goat cheese contains slightly less calcium than cheese made from cow’s milk, but of course, it is still a dairy product. 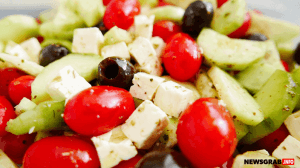 This means that a slice of feta does contribute to your daily consumption of calcium, thus resulting in strong bones and teeth. It also contains potassium, magnesium, and a little iron. And a relatively large amount of sodium, but we’ll come back to that later.

Also with vitamins, you could say that feta is a fairly standard dairy product. Like all animal products, it contains several vitamins from the B-complex. Vitamin B12 is particularly important for many people. Especially those who don’t eat much meat quickly become deficient in it. Feta also contains a relatively high amount of vitamin D.

Most of it is produced under the influence of sunlight, but the elderly and people with dark skin can often use some extra. Finally, feta also contains some vitamin A. Sheep’s and goat’s milk contain even more of it than cow’s milk!

And then there’s that salt – or sodium, of course, if you want to call it by the mineral itself. Because feta lies in a salt bath for so long during production, it should come as no surprise that the end product is also quite salty. And since many Americans eat much more salt than is healthy, that can be a problem.

On the other hand, many people who eat healthily also consume less salt. Especially if you usually cook yourself, it will usually be okay with the extra salt.

Another factor in determining whether feta cheese is healthy is the amount of fat. Now, of course, fat does not immediately make you fat (as loyal readers of my blogs will know by now). On the other hand, it does contain a relatively large amount of calories. It is therefore wise not to eat too much of it.

Feta has a fat content of about 45% in the dry ingredients. That sounds dramatic, but a large part of feta also consists of moisture. On balance, this brings the fat percentage down to about 20%. Still a fair amount, but fine if you eat it in moderation.

Finally, it is still relevant to consider allergies. People who cannot tolerate cow’s milk sometimes benefit from choosing from sheep or goat dairy products. However, bear in mind that this does not always work! Allergies from cow’s milk are usually caused by one of the amino acids found in cow’s milk.

Some of these are only found in cow’s milk, but others you will just find in all dairy products. It will therefore depend on your personal allergy whether you can tolerate feta better. If necessary, you can of course consult your doctor about this.

Well, now that we’ve discussed all that, it’s time to answer our glaring question. And as almost always, yes, but in moderation, and only within a healthy diet. If your daily salt and calorie intake are already too high, a mountain of feta cheese is not the best choice.

However, do you eat well and varied, with lots of fresh (and salt-free) produce? Then it really can’t hurt to use feta as a tasty condiment every now and then! Just don’t work away whole kilos of it right away, then you will probably be fine.

Having just recently spent a few weeks in July on the isle of Syros, I found out what a true Greek salad is and savored many of them, all a variation on this theme, in the height of the season. The tomatoes there, I might say, were the best that I have ever eaten—sweet and tart and red and bursting with juice. In restaurants and the market, I only ever saw English cucumbers, so they were served with the skins and had no big seeds. If you are using a waxed cucumber, it must be peeled.

There are many kinds of feta to choose from; sheep, goat, cow, very salty, extra creamy and very fresh. On this traditional dish, not once did I see the feta crumbled, it was always sliced, in keeping with the textures of the other salad ingredients. It was caper season, and let me tell you, fresh cured capers are something that we don’t see here! Ours are small and briny, so I generally rinse them before using. This salad is placed on the table family style and generally serves 2 to 4 people; it is easily doubled or tripled.

Arrange the cucumbers on a plate and lay the tomato slices over them. Season lightly with salt and pepper. Lay the feta slices on the tomatoes and scatter the onions over the cheese. Scatter the olives and capers over the salad. Drizzle about 1 tablespoon olive oil, or a little more overall and scatter the oregano or dill on the top of the salad as garnish. Serve with crusty bread and a glass of wine or a cold beer.